Since he was a child Giovanni Monaci, that originally came from Branzi, a small village in the Brembana Valley, cultivated the passion for the production of the “Branzi” cheese, therefore continuing the old tradition of his ancestors who, since the last century, were well-known for their activity carried out especially in in the alpine pastures.

After a short experience in a cheese factory in Lurano, in the Bergamo lowland, where he perfected his knowledge of the production of the “Taleggio” cheese, with his father took up the life of the dairyman and moved to San Giovanni Bianco, in the Brembana Valley, where, with his siblings founded the Caseificio Monaci snc.

The full-time activity of transformation of the milk allowed to improve the quality of a cheese, the “Branzi” precisely, that nowadays is considered to be the highest quality by industry experts. Responsible for the production, he launched the well-known brand “Il dolce Branzi Monaci”, a cheese that can be purchased in all major shops and supermarkets in Bergamo and in its province.

Now, after forty years, Giovanni Monaci has renewed the wager made in the past and with the help of his children he has moved to Almenno San Salvatore to relaunch a valley, those born around the Imagna river, with enormous potentialities. The new facility, technologically cutting age in the industry underwent an expansion of the product range that now bears the name of the Imagna Valley.

Since 2015, with the acquisition of the Caseificio Battipaglia in Brugherio (MB), the Monaci family has started to bring to the table also “pasta filata” cheeses, specialties of southern Italy. Active since 1957, the historic cheese factory, yesterday as well as today bases its business philosophy on the use of traditional milk processing techniques, specializing especially in the production of cow’s-milk mozzarella, following the typical recipe that provides for the use of whole milk, rennet and salt. 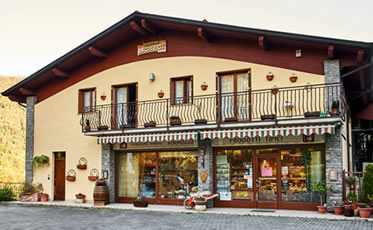 In our cheese factory we produce by hand cheeses and dairy products of the Bergamo tradition, based on cow’s, goat’s and mixed milk. Our dairy production fulfills in the respect of old artisan traditions basing on the exclusive use of 100% Italian cow’s milk, coming from the best cattle-sheds of Lombardy, especially from mountainous areas. All of this, together with the family-run character of the company, grants a special attention to the product and is a guarantee of its genuineness and typicality.